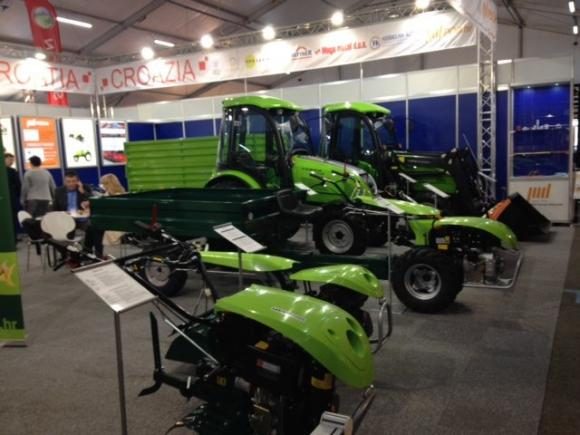 Labinprogres – TPS took part in the 41st edition of the fair EIMA 2014, all within Croatian Agricultural equipment cluster and accompanied by Croatian Chamber of Commerce. It is important to mention that the EIMA 2014 broke records in the number of visitors and recorded nearly 236,000 visitors. In this context, Labinprogres TPS recorded a large attendance at its exhibition area

Dealers, distributors, professional farmers and private individuals from all around the world have shown great interest in Labinprogres program and equally for tractor and walking tractor range of products. There were exchanged important contacts. After the fair will be contacted potential partners from many countries such as Greece, Portugal, Spain, South American countries, Northern and Central Africa, Bulgaria, Ukraine, Azerbaijan, Latvia and others.

From the past experience of Labinprogres, EIMA is a fair of global significance and Labinprogres found some of the most important customers and partners from Europe, but also from other continents, right at this fair. It is expected that after completion of the EIMA 2014 Labinprogres will continue to expand on the market through new partners from new countries, increase export and thus strategically position itself on the global agricultural market. It’s good to mention that Labinprogres – TPS exports 85% of its production and the company continues its activities in this direction.

The focus of expansion into new markets